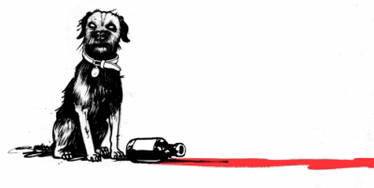 Poison City has a very prominent hook – essentially, it asks the question, What would Harry Potter look like several years (and drinks) down the road? Reading this gritty South African fantasy though, it offers far more than a potential Potter fan-fic. Instead, Poison City offers up a twisted, gripping ride that feels a Neill Blomkamp-directed version of Men-in-Black.

Thanks to Hachette Australia and Hodderscape for a review copy.

There’s an unspoken literary and cinematic law that any story set in South Africa has to be filled with violence, swearing, and crooked cops. Poison City delivers big on those three tenets, and although I initially wondered if Poison City would be something along the upper-end of YA, I have to admit that the novel is definitely best-suited in the adult category.

That said, there’s nothing too excessive here. The basic plot follows Gideon Tau, a London-born Police Officer in the “Delphic Division”, a secret police force in South Africa charged with investigating supernatural crimes. This world is one filled with supernatural creatures just barely hiding from the masses, a melting pot of Christian, Hindu, Chinese and – most frequently – South African demons, fae, gods, angels, and everything in between.

The much-touted sidekick, a talking alcoholic dog who serves as Gideon’s spirit guide. Sadly, the Dog doesn’t actually feature too prominently in the story – a missed opportunity, as Dog was channelling some Ted-like humour into a story that can, at times, be incredibly bleak.

Like I said earlier, Poison City is definitely an adult novel. Gideon is dealing with the abduction and death of his daughter, the destruction of his marriage following that, and his cases lead him to some extraordinarily grisly scenes of death and human depravity. Poison City really piles on the “mankind is disgusting/evil/abhorrent” rhetoric, to the point where it becomes almost annoying. I get it, politicians are corrupt and selfish, cops are crooked and power-hungry, mankind is dark and twisted. What starts as an interesting look into the underworld becomes pointless repetition.

A gritty, raw look at a South Africa ruled by a hidden underworld of supernatural, channelling a bleak Blomkamp-esque vibe.

Sometimes too heavy-handed with its theme, and under-utilises the talking dog aspect of the promotion and marketing.

A gritty South African crime series filled with gods, angels, and vampires. Sometimes a little too bleak for its own good, but rallies back with great action and a twisting plot.